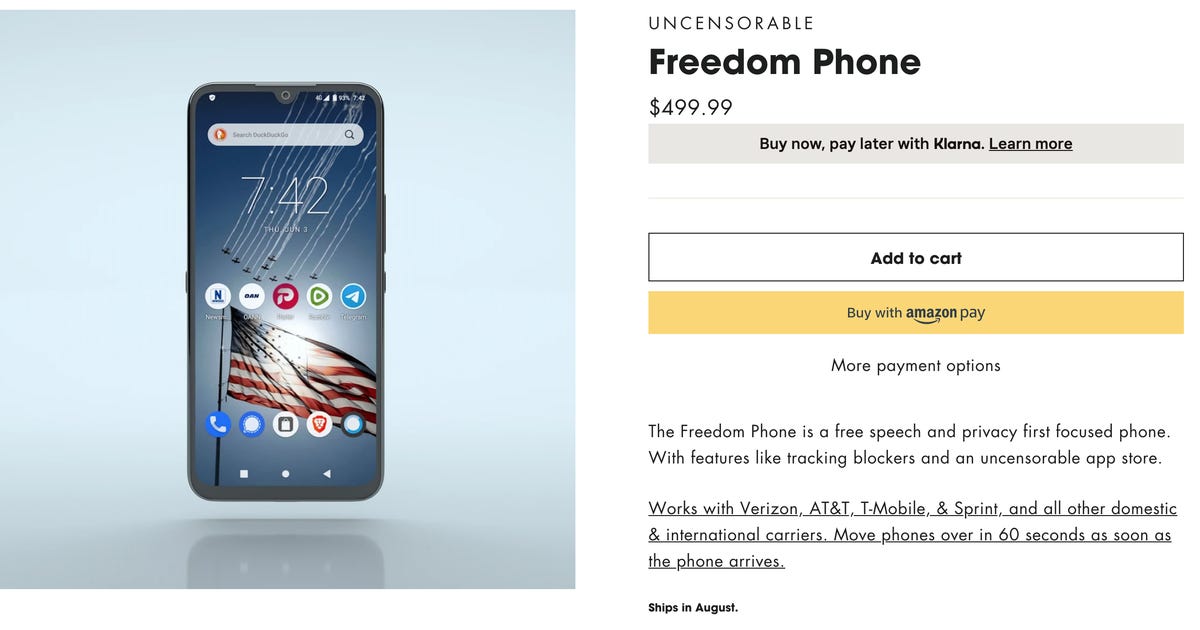 A new “free speech and privacy first” phone unveiled this week is raising red flags, with one report suggesting it’s just a rebranding of a budget Chinese phone.

The $500 Freedom Phone was launched Wednesday by Erik Finman, a self-proclaimed “bitcoin millionaire,” as an alternative to popular devices from Google, Apple and other Big Tech companies. The website for the Freedom Phone is void of the usual technical specs but says the gadget works with all major US carriers and is supported by an “uncensored” app store.

The phone apparently runs FreedomOS, an operating system that Finman said in a tweet was “our own blend of AOSP, LineageOS, GrapheneOS, and our personal development as well.” The three operating systems are based on Google’s Android OS, which powers almost nine out of 10 smartphones in the world.

Though people might understandably be drawn to a phone that prioritizes privacy and free speech, multiple reports have raised security concerns and questioned whether the Freedom Phone is being upfront with customers.

The Freedom Phone appears to be a rebranding of the Umidigi A9 Pro, a roughly $120 phone made by Chinese tech company Umidigi, according to a report Thursday from The Daily Beast. Finman reportedly confirmed to The Daily Beast that the Freedom Phone is manufactured by Umidigi but didn’t say what model it was based on.

Finman didn’t explain to The Daily Beast how the Freedom Phone justified its apparent markup, but reportedly suggested it features customized hardware and improved memory.

There are also concerns about the phone’s security. Finman reportedly confirmed to The Daily Beast that Freedom OS is based on Google’s Android operating system, but custom versions come with risks, since they might not get the latest patches and security updates. The website for the Freedom Phone also didn’t detail how it plans to keep malicious apps out of its “uncensorable app store,” dubbed PatriApp.